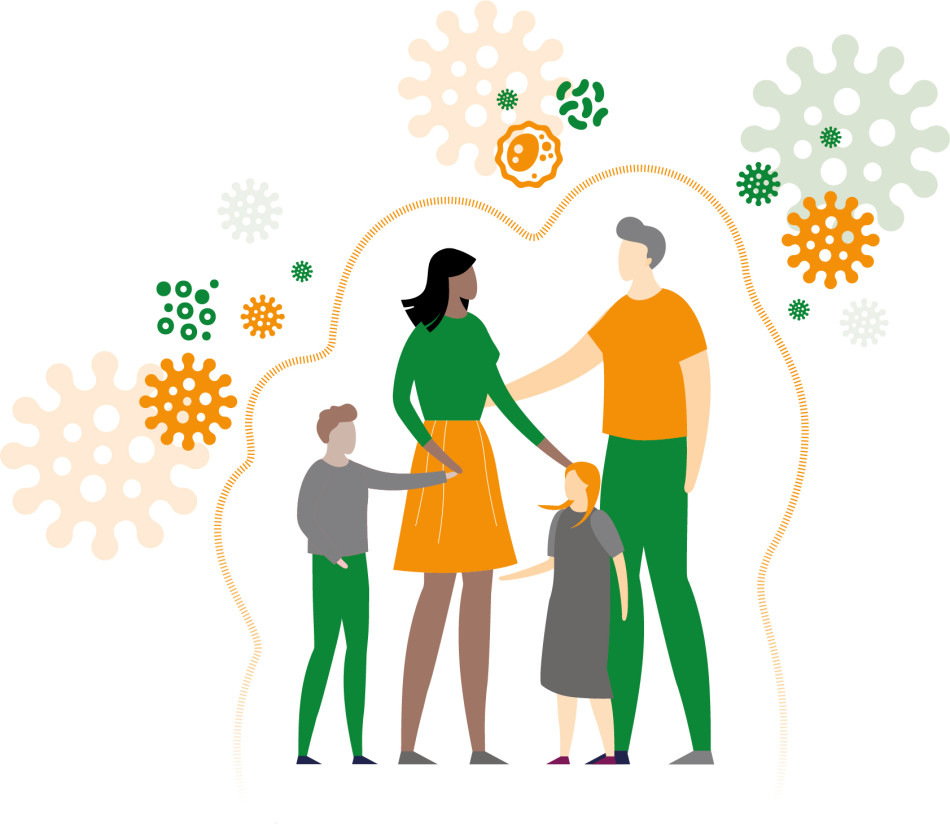 Our immunity works as a finely balanced system to repel harmful bacteria and viruses. Too little response and we fall prey to whatever bugs are going around. Too much and we risk developing autoimmune conditions, such as rhinitis or type 1 diabetes. That's why it's a myth that we can 'boost' immune function.

However, it's clear that having a balanced diet and healthy lifestyle help our immune system to work optimally. Certain vitamins and minerals have a role in supporting  normal immune function. The main ones are vitamins A, C and D, but folate, iron, selenium and zinc are also useful.

Vitamin A is found in orange/red vegetables, dairy foods and oily fish. It is believed to support immunity by maintaining the health of our skin and gut which both act as a barrier to invading pathogens. Vitamin A is also used by key immune cells in the body.

Vitamin C - also called ascorbic acid - is found in citrus fruits, fruit juices, tomatoes, peppers, kiwi fruit, strawberries and broccoli. Like vitamin A, it supports the gut and skin barriers but also promotes the growth and function of key immune cells. Vitamin C encourages white blood cells to move to sites of infection to target bacteria and viruses – interestingly vitamin C levels in white blood cells are 10-100 times higher than in plasma. During recovery, vitamin C calms inflammation and acts as an antioxidant to neutralise substances which cause damage to cells.

Too many of us are low in vitamin D – a nutrient made in our bodies in response to sunlight as well as provided by foods like eggs, oily fish and mushrooms. Vitamin D receptors are found throughout the immune system and the nutrient particularly supports the work of T-cells which act like immunity managers. Vitamin D is also anti-inflammatory.

Folate - the natural form of folic acid - is found in green leafy vegetables, orange juice and fortified breakfast cereals. Its role in immunity involves promoting the optimal activity of immune cells through the correct activation of their DNA. Folate also helps build proteins which are used to make helpful cells.

Iron has a role in innate immunity – which is the immunity we are all born with and which acts as the first line of defence against bacteria and viruses. Low iron levels in the blood can increase the risk of infection. Iron is found in red meats, green leafy vegetables, beans and pulses.

Zinc is probably the most important mineral for immunity. It helps manage several types of immune cells and stimulates the body's response to viruses. It is also an antioxidant which helps protect our body cells from damage during infection and recovery. Fish, shellfish and nuts are particularly rich in zinc.

Selenium is found in pork, turkey, chicken, fish and eggs. Brazil nuts are a very rich source. Selenium helps direct the actions of T-cells and natural killer cells which effectively target viruses. It also has antioxidant and anti-inflammatory properties.

A major barrier against viruses and other pathogens is our gut, which is why it's important to keep our digestive system in good working order. Around half a kilo of body weight is made up of the bacteria living in our large intestines. Many of these are so-called 'friendly' bacteria which have a role in stopping pathogens getting access to the body.